Estación Caribe: a model for the youth and The Artisan women of Moravia

"Again men, challenged by the drama of the current time, propose themselves as problem. They discover that they know little of themselves, of their "place in the cosmos", and are getting eager to know more. Moreover, in their recognition of their little self-knowledge, lies one of the reasons of this pursuit."

"My masculinity is not measured in inches"

"We are a mixture of feminine and masculine. We are human"

Martín, singer of Estación Caribe, asks to a shy audience of students: "What is really to be a man?". Girls and boys look at each other and suddenly a hand raises in the crowd. "A man is the one who knows how to respect" says a boy.

Estación Caribe carries out workshops in the biggest school of Moravia, the same neighborhood they grew up. During the workshops music and drama are channels for inviting the audience to have a much wider and flexibe idea of masculinity, reflect on gender equality and other topics related to sexuality. 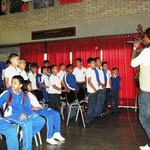 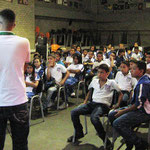 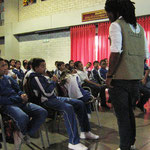 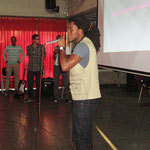 Workshops in the school Francisco Miranda, in Moravia

Colombia dominates the statistics in violence towards women in Latin America. For instance, recently the media has revealed the sad stories of many women attacked with acid. Being Colombia the country with the biggest number of acid attacks in the world.

But it is not only a problem affecting women, the number of acid attacks against men is very alarming too. Sometimes the media tends to forget to give visibility to the men as victims of violence, and many of these cases haven't been in the public eye.

One of our main partners in Moravia is the Centre of Cultural Development. This place is an example of the transformation the community has been achieving throughout the years. In the center arts and culture are used as vehicles for change, in propitiating spaces for expression of different grassroot-movements in the community, and by giving voice to people of different age, background and styles.

During the month of July of this year, we will have an event called Bazaar of Masculinities in the premises of the Cultural Center.

The event is a festival where different NGOs, government programs, youth organizations and other community associations will have a space to present themselves. The bazaar has been designed to cover three main areas:

There will be a stage with artistic performances. Estación Caribe is going be the main show.

LA SIESTA's headquarter is in Jugenheim, a village in Rhine-Hesse – a region in the south west of Germany. This company has specialised in the development, marketing and distribution of hammocks since 1991.

This company manufactures colorful and beautiful hammocks in Colombia. They not only preserve a very old South American tradition, whose weaving techniques have been in danger of disappearing, but they are also environmental and socially aware.

Some of their products are made out of organic cotton and La Siesta has been supporting several social projects in South America.

But what is the connection of this company located in a calm village of Germany with the vibrant and colorful Moravia?

La Siesta manufacturers its hammocks in Medellin, and they have donated to Revive the left over pieces of their colorful fabrics for a social project, which aims to benefit artisan women in Moravia. 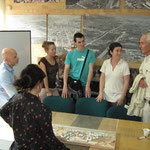 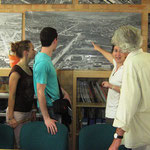 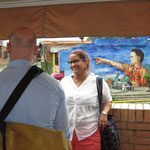 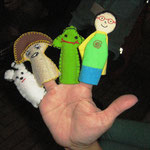 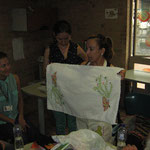 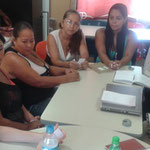 A delegation of La Siesta visited Moravia last month in order to meet the artisan women, and the community where the projects are taking place.

According to the latest report of the state of the Millennium Development Goals (MDGs), 51% of the Colombian population are women, and the unemployment rate for women has been declining nationwide. However, in 2013 it was 13% compared with 7% of men. This is one of the reasons we believe in the importance of this entrepreneurship project for women, and the benefits that it represents for their families.

Alexander Grisar, founder of La Siesta, spontaneously announced during his meeting with the artisan women, that he will donate two industrial sewing machines. Something that came as a surprise to all, since we were very happy already with the donation of the fabrics left from the hammocks, by which several women are going to be benefited.

We deeply thank to:

The Ministry For Foreign Affairs of Finland for funding our activities. To the Center of Cultural Development of Moravia for opening its premises and partnering with us in the development of our projects. To La Siesta for the donation of their colorful fabrics  and Alexander Grisar for his generosity. To Paulig, for helping Estación Caribe in recording their first album and Estación Caribe in helping us to reach more young people to deliver a message in a fun and creative way.

This is just the begining and there are still more beautiful happenings and activities taking place in Moravia. Please keep following our work.